A Call for Funny Presentations for the

The Festival of Bad Ad Hoc Hypotheses (BAHFest) is a celebration of well-argued and thoroughly researched but completely incorrect evolutionary theory.

BAHFest has been held six times since 2013, selling out auditoriums with over 1000 seats each. For 2016, we're making our way across the great Pacific Ocean for the first time to do BAHFest Sydney, as part of the Sydney Science Festival.

To give you a sense of what we want, here are our recent winners:


We highly recommend you look at all of the videos before submitting.

What are we looking for in specific?

We need short (3-5 minute) presentations which describe original bad theories of evolutionary adaptation. The speakers will then be asked to “defend” their theories before a panel of judges for 1-3 minutes.

We will provide assistance and guidance with preparing your talk, and you will be required to attend two rehearsals to ensure development is on track. We will provide opportunities for developing speakers’ presentation skills as required.

For your submission packet, a one-page document describing your theory would be best.

When and where is it?

The show will be held at the Powerhouse Museum in Sydney on Friday 19 August.

What format is the event?

Each event will have a celebrity keynote, followed by six speakers competing for best in show. Speakers will have a mic and access to a video projector.

There will be a panel of geeky judges to determine who presented the best theory, and the whole thing will be recorded.

How do I submit?

All you have to do is fill in the form here. However, we recommend that before you submit something, you check out our suggested “Do’s and Don’t’s” section at the bottom. We also recommend that you watch last year’s presentations to get a sense of what we’re going for.

If we like your idea, we’ll follow up for a more in depth presentation. You don’t need everything 100% worked out for your submission. If the idea is great, we will work with you to get it perfect.

What’s in a good theory?

These are the four criteria our judges will be using, so they should be things you think about for your submission.

1) Force of Science - how much “scientific” information was brought to bear (graphs, real citations, “research” etc.)

2) Artistry - how unexpected and clever the idea and presentation are, and how well the presentation is delivered.

3) Parsimony - the simplest theory that explains the most data is best.

4) Strength of Defense - how well did you defend your views to the judges. Please note - being funny is not a good defense. We want to see you actually defend your terrible terrible theory!

Are there things I can’t say?

It’s science communication, so there’ll no doubt be plenty of talk of sex. However, we’d prefer you not do anything too horrifying. Do your best to keep it PG-13. Absolutely nothing x-rated is allowed, and nothing that even has a hint of sexual assault is allowed. Proposals that could be construed as racist, sexist, or otherwise bigoted will be thrown out immediately. Talks pertaining to gender or genetics are permitted, but we ask you to do your best to be respectful.

Do I need to be a scientist to submit?

Not at all. However, you do need to be able to talk in a scientific manner and speak well to an audience.

Can you pay for my travel?

Unfortunately, no. We are doing our best to keep prices low, so we are trying to get people who are local or willing to pay their way to the event.

How many submissions can I send?

What’s in it for me?

The presentation judged best will get the coveted BAHFest trophy of Darwin, looking unimpressed! 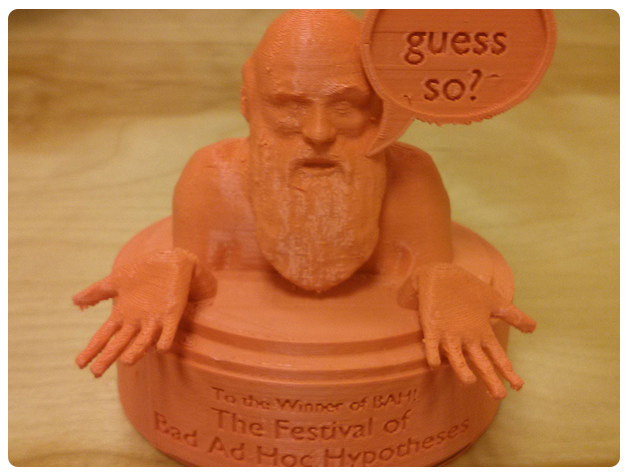 We hope to see you there!

DO Include a video

We need people who can both write and talk. If you have video of yourself doing your talk or video of you doing a presentation, we can get a sense of who you are. If you can host it on youtube, we’d really appreciate that.

DO Edit your document

We’re not sticklers about margins or anything, but sloppy editing makes it harder to read your submission and makes us think you won’t take it seriously enough.

DO Take it seriously

The best presentations are ones that bring real science. We want to almost believe you! Find some citations! Make some graphs! Talk to experts! Go all out and we’ll wanna hear more.

DO Try to impress us

One of the submissions that really stuck out last time was presented as if it were a scientific paper. It included citations, charts, and modeling equations. You don’t have to be this hardcore (we care most about the idea), but if you are it’ll show us that you’ll probably do a good job on stage.

Our reviewing team will be mostly scientists and science outreach people. We are very scientifically literate. There have been big cheers for differential equations and phylogenetic trees. Don’t worry about being too nerdy.

DO Consider doing a presentation about non-human animals

The vast majority of our submissions last year were about human evolution. This is not surprising, since most of our audience are humans. But, you’ll stand out from the crowd if you do something more offbeat.

DO Keep it tight

You might have a million ideas for your theory. Try your best to restrict yourself to related material. Tell us a little scientific story about how airtight your theory is. Don’t get all over the place, even if it takes you somewhere potentially funny.

DO Have a good idea

Okay, this seems obvious, but here’s the thing: A ton of polishing isn’t going to fix a bad idea. Find your brilliant idea first, then throw your genius into it. We appreciate hard work, but we would rather help fix a great idea poorly presented than fix a mediocre idea presented well.

The whole idea here is that we’re doing a fake seminar. We want a real talk about a bad idea.

Along the same lines - slipping in little jokes breaks that fourth wall and takes away from the feel of the show. Don’t slip in zingers unless they’re the sort of silly joke someone might actually make at a real seminar (watch the videos for examples). The funniness should come from how developed your bad idea is.

Only terrible theories, please! It’s not going to be funny if it might be true.

We want theories about real phenomena. Also, we don’t want to get sued.

DON’T Send a theory about non-life

BAHFest is about fake theories of adaptation. So, we must deal with things in biology. We’re willing to stretch the definition a little (RNA or viruses are fine!) but nothing that’s clearly non-life.

This can happen by accident if you’re writing about sexual selection, but please try to be cognizant of it, especially if you’re doing a presentation on humans.