What are we looking for in specific?

We need short (3-5 minute) funny original presentations in which the speaker gives a fake scientific lecture. The lecture can be on any scientific topic, but it must either propose a hypothesis, suggest a big idea for a scientific project, or describe an experiment. See the video above for an example of a winning talk. If you’ve seen earlier shows, you’ll know we formerly provided a theme for each show. We are now doing all shows in an “open theme” format. In case that’s daunting, here are some writing prompts:

The speakers will then be asked to “defend” their theories before a panel of judges for 1-3 minutes.
For your submission packet, a one to three page document describing your theory would be best.

When and where is it?

You can submit a hypothesis for multiple shows below. For March 2020, there are shows at Rice University in Houston, TX and at Imperial College in London.

What format is the event?

Each event will have a celebrity keynote, followed by 6 speakers competing for best in show. Speakers will have a mic and access to a video projector.

There will be a panel of geeky judges to determine who presented the best theory, and the whole thing will be recorded.

How do I submit?

All you have to do is fill in the form here. However, we recommend that before you submit something, you check out our suggested “Do’s and Don’t’s” section on this page. We also recommend that you watch previous presentations to get a sense of what we’re going for.

We will review on a rolling basis, so you improve your odds by submitting early. If we like your idea, we’ll follow up for a more in depth presentation. You don’t need everything 100% worked out for your submission. If the idea is great, we will work with you to get it perfect.

PLEASE NOTE: the deadline for both shows is Saturday, January 7, 2020.

What’s in a good theory?

While we don’t want to overly constrain your proposal, generally speaking, a good idea for a BAHFest talk solves some mystery in science or some need in human life by proposing something crazy. For instance, Dr. Sarah Hird’s winning talk proposed that mammal sleep patterns could be explained by assessing the respective awfulness of various species’ lives. Kristin Rowan won by proposing a chemical-based social media network for lonely plants.

Both of these ideas were funny intrinsically, but also came with strong elaborations of the concept, using real science and math.

Are there things I can’t say?

We’d prefer you not do anything too horrifying or too sexy. Do your best to keep it PG-13. Absolutely nothing x-rated is allowed, and nothing that even has a hint of sexual assault is allowed (something to be mindful of if your proposal is an evolution themed proposal). Proposals that could be construed as racist, sexist, or otherwise bigoted will be thrown out immediately. Talks pertaining to gender or genetics are permitted, but we ask you to do your best to be respectful.

Do I need to be a scientist, or be attending the University where the show is held to submit?

Not at all. However, you do need to be able to talk in a scientific manner and speak well to an audience.

Can you pay for my travel?

If you are local to the show, we can reimburse you for the cost of getting to the event. If you have to hire a babysitter for the night in order to come to the show, we can pay for that as well. In general, we are not able to pay for flights and airfare for all six contestants. However, this year we are offering small travel grants ($500 or less) to cover one out of town contestant for each show.

How many submissions can I send?

What’s in it for me?

The presentation judged best will get the coveted BAHFest trophy of alchemist Hennig Brand boiling his own urine in hopes of producing gold. 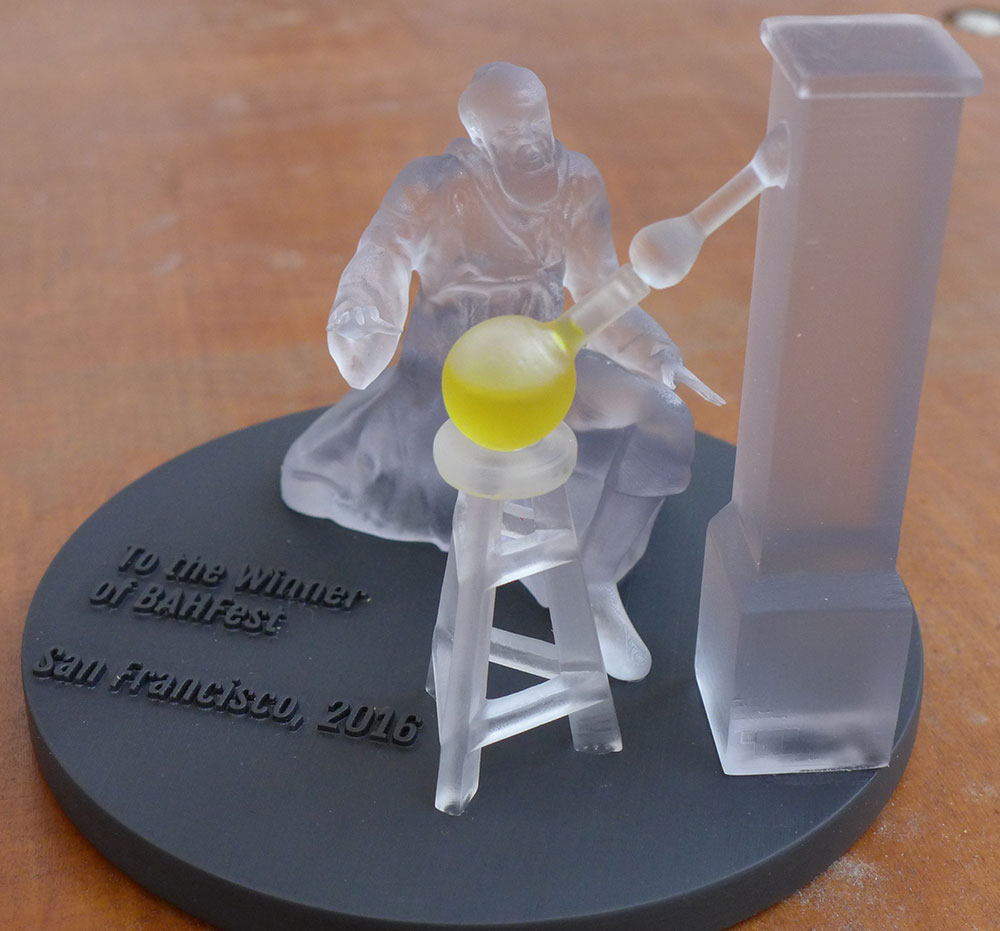 Also, fame for eternity. We hope to see you there!

DO Include a video

We need people who can both write and talk. If you have video of yourself doing your talk or video of you doing a presentation, we can get a sense of who you are. If you can host it on youtube, we’d really appreciate that.

DO Edit your document

We’re not sticklers about margins or anything, but sloppy editing makes it harder to read your submission and makes us think you won’t take it seriously enough.

DO Take it seriously

The best presentations are ones that bring real science. We want to almost believe you! Find some citations! Make some graphs! Talk to experts! Go all out and we’ll wanna hear more.

Our reviewing team will be mostly scientists and science outreach people. We are very scientifically literate. There have been big cheers for differential equations and phylogenetic trees. Don’t worry about being too nerdy.

DO Keep it tight

You might have a million ideas for your theory. Try your best to restrict yourself to related material. Tell us a little scientific story about how airtight your theory is. Don’t get all over the place, even if it takes you somewhere potentially funny.

DO Have a good idea

Okay, this seems obvious, but here’s the thing: A ton of polishing isn’t going to fix a bad idea. Find your brilliant idea first, then throw your genius into it. We appreciate hard work, but we would rather help fix a great idea poorly presented than fix a mediocre idea presented well.

The whole idea here is that we’re doing a fake seminar. We want a real talk about a bad idea.

Along the same lines – slipping in little jokes breaks that fourth wall and takes away from the feel of the show. Don’t slip in zingers unless they’re the sort of silly joke someone might actually make at a real seminar (watch the videos for examples). The funniness should come from how developed your bad idea is.

Only terrible theories, please! It’s not going to be funny if it might be true.

We want theories about real phenomena. Also, we don’t want to get sued.